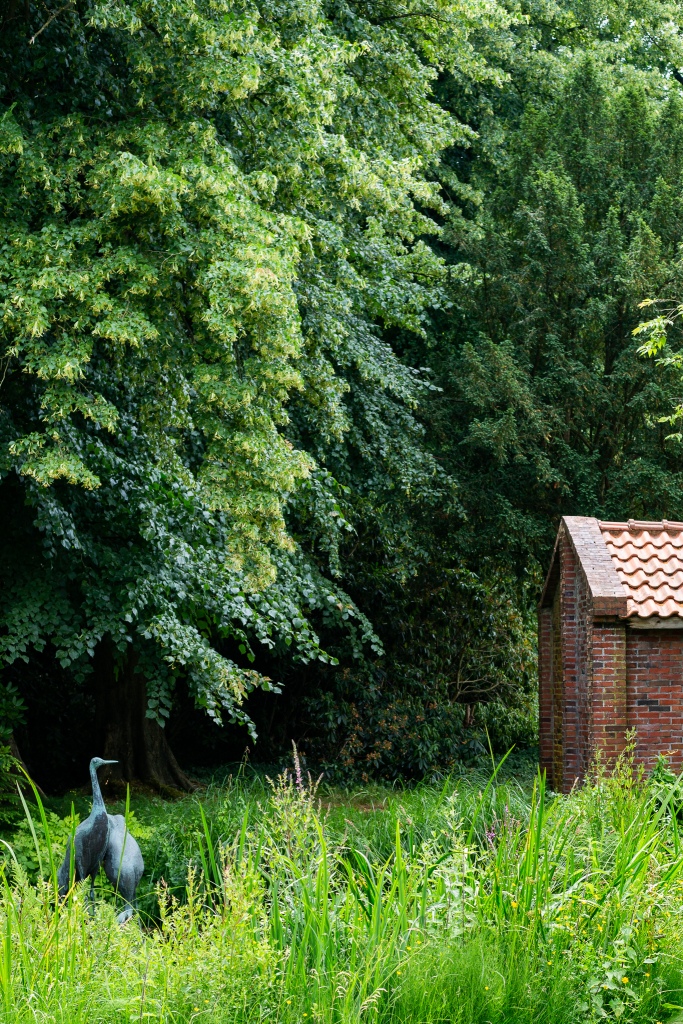 A sunny summer afternoon at a lovely park and a beautiful cake have a lot in common – they make us feel at home in this very moment, wherever it may be. There is no deeper sense to neither of them, yet moments like these are essential for our wellbeing. Because on a garden walk or at a coffee-table set with love, we are dedicated to beauty just for itself. It is l’art pour l’art like the French say, and indeed there is no better way to describe the quality of awareness that lies in all those things that we do for the sake of unintentional joy.

Too much of philosophy for just a stroll and a sweet treat? Maybe yes – let’s blame it on the poetic qualities of one of the most lovely places that I know in my old home town, the castle garden in Oldenburg. Whenever I travel to the North, I pay this place a visit, and while many childhood memories come along with it for me, new ones have assembled for Arne and me together over the years.

So it’s high time to introduce you to this idyllic piece of urban nature. Created at the beginning of the 19th century as an English landscape garden (which had been à la mode at that time), romantic meadows, small creeks and many old trees including some redwoods grace the place. In its very center, you find a rose and a flower garden that embrace a vintage pavilion as well as a wonderful old greenhouse. Since this is not enough beauty at a place, the neighbouring historic gardening buildings such as former barn and stalls create a picturesque contrast. In front of the heritage brickstone facades that are so typical for northern Germany, palmtrees in terracotta pots grace the place, slighty swaying in the summer breeze.

Maybe this is one of the most charming things about the castle garden, this unique mixture of rustic, elegant and mediterranean impressions, light and airy and at the same time down-to-earth. We have been here and seen it all at every season, always trying to catch the spirit in some photographs. So let’s go for a summer walk – which wouldn’t be complete without coffee and cake, would it. I have been thinking for a while what kind of treat might fit my feelings about this kind of aristocratic, yet grounded place. While searching for ideas, one thing came to another, and in the end there was this tart, playfully marrying a touch of history with the happy now, and not the least paying tribute to dear memories.

On an autumn visit that dates back a couple of years already, we bought some apples and pears at the old court gardener’s house that happened to be heirloom varieties growing in a secluded part of the park. Lovely conincidence (and a jump back in the present): Some two weeks ago, I was offered wonderful heirloom pears from the precious trees of my garden friend’s neighbour, small and speckled in green and red. Directly after picking, they were all firm and not that tasty, but they became tender and juicy and full of flavor after one week’s rest on our kitchen counter. A few urban-foraged blackberries joined in, and so did some cherries, white currants and Zwetschgen, a regional sort of plums from the organic shop and the farmer’s market, all of them heritage fruit as well. I’m always happy with random findings like these since such special sorts taste great for one thing and are a wonderful contribution to plant variety for another.

All this beauty was meant to become a sensual tart decoration, a bit like the ones in the paintings of the old masters. So, there was only something sophisticated missing like an elegant mousse. Which is how aquafaba came in. Chances are good that you already heard of this wonderful vegan alternative to beaten eggwhite which is made of the liquid that canned or bottled chickpeas and beans come along with. I had some trys with chickpea water that were not too convincing tastewise since its special flavor is very noticeable. Not so with beans – the very slight taste of legume is so much embraced by chocolate vibes that you couldn’t tell if you wouldn’t know what’s in. All told, mousse based on aquafaba is absolutely fluffy and airy, so we are in dessert heaven ever since. And here we go with a bit of style and grace, yet with a sense for the simple – a combination which is lovely on a plate and in life alike.

* AquafabaAquafaba is the liquid where legumes like chickpeas or white beans are canned or bottled in. Due to its content of starch and proteine, it can be whisked and beaten like eggwhite if room tempered. There are lots of instructions on the internet how to prepare aquafaba foam and which ingredients to add. They all have in common a little acid like lemon juice and a little salt (the latter of which might be an ingredient of the bottled legumes already, so take a look at the ingredients list of the respective product that you use). Fine (raw) sugar or date sweetener also adds up to a nice consistency, while for a mousse that involves chocolate, you can reduce the amount to taste.

Many recipes also demand for a thickener, and there are plenty of options from starch to baking powder to xanthan. I used cream stiffener (an organic product in order to avoid additives), and I was very content with the fluffy, yet firm result. Cream stiffener is not suitable for baking however, the foam collapses in the oven’s heat quite quickly.

Aquafaba is a wonderful alternative to eggwhite not just for vegans but also for everybody who wants to avoid eggs for allergic or nutritional reasons, and it is a safe version in summer’s heat cause many people don’t feel comfortable with raw eggs in recipes during the warm time of the year. Please note however: It is recommended not to consume too many treats at a time that are prepared with aquafaba. Due to its content of phytic acid and lectins that might affect your digestion.

This is a no-bake tart which is quite comfortable at hot summer times like these. Any fruit in season can be considered for decoration, so you can easily adapt the cake to spring, summer, autumn and winter. For the fruit layer, you can make use of any fruit that is still edible but not that lovely any more – no waste, more fun 😉 .

For a springform pan with 20 cm diameter

For the fruit layer:

For the Mousse au chocolat:

Line the bottom of the springform pan with baking paper. Also cut a long strip of baking paper and line the pan’s side with it.

For the crust, coarsely crush the cookies or crackers, after that grind them not too finely in your food chopper. Gently melt the white chocolate in a low tempered bain-marie. Take off the heat, add the coconut oil and the cookie crumbs and mix well. Spread the mixture evenly on the bottom of the baking pan. Press on with your hands and a bit up the side. Cover the springform pan and leave to cool on the fridge for half an hour.

For the fruit layer, wash all fruit; core the pear and pit the plums and chop roughly. Along with the blackberries, put the fruits in a high blender jar and mash finely with your hand-held blender.

In a very small saucepan, mix 50 ml of water with the agar-agar, bring to a boil and simmer for one minute while whisking. Pour into a bowl and allow to cool slightly, then gradually stir in the fruit puree. Pour the fruit mix onto the tart crust and spread evenly. Again, cover the springform pan and leave to cool for half an hour.

For the mousse, gently melt the dark chocolate in a medium tempered bain-marie. Pour the liquid chocolate into a mixing bowl and allow to cool a little.

In the meantime, finely grind the date sugar (e.g. in a clean coffee grinder reserved for grinding sugar and spices). Drain the beans in a colander and keep the liquid (aquafaba) which should be 125 ml. Make use of the beans in another dish. Pour the liquid in a high blender jar, add lemon juice (and sea-salt if necessary). Beat for about 1 minute at low to medium level until you get a soft foam. Add the cream stiffener little by little and continue to beat at medium level for 1 minute. Now add the ground date sugar little by little and beat at medium to medium-high level for further approx. 5 minutes until the foam is shiny and peaks form when you pull the whisk out.

Place the foam on the slightly cooled-down chocolate and fold in quickly. Do not stir too much so that the foam does not collapse. Spread the mixture evenly on the whole tart. Cover and leave to cool for at least 2 more hours or overnight.

For decoration, wash all fruit. Core the pears and cut into slices (you can also use the whole fruits as an eye catcher). Pit the cherries and the plums, cut the latter in half. Strip the white currants off the panicles (or alternatively use the whole unstripped panicles if you like the look). Decorate the tart with all fruit. If you wish, add shaves of white chocolate, edible blossoms like lavender, and/or herbs like a little basil. To be honest: all of this had been at hands, I simply forgot about it ;-). 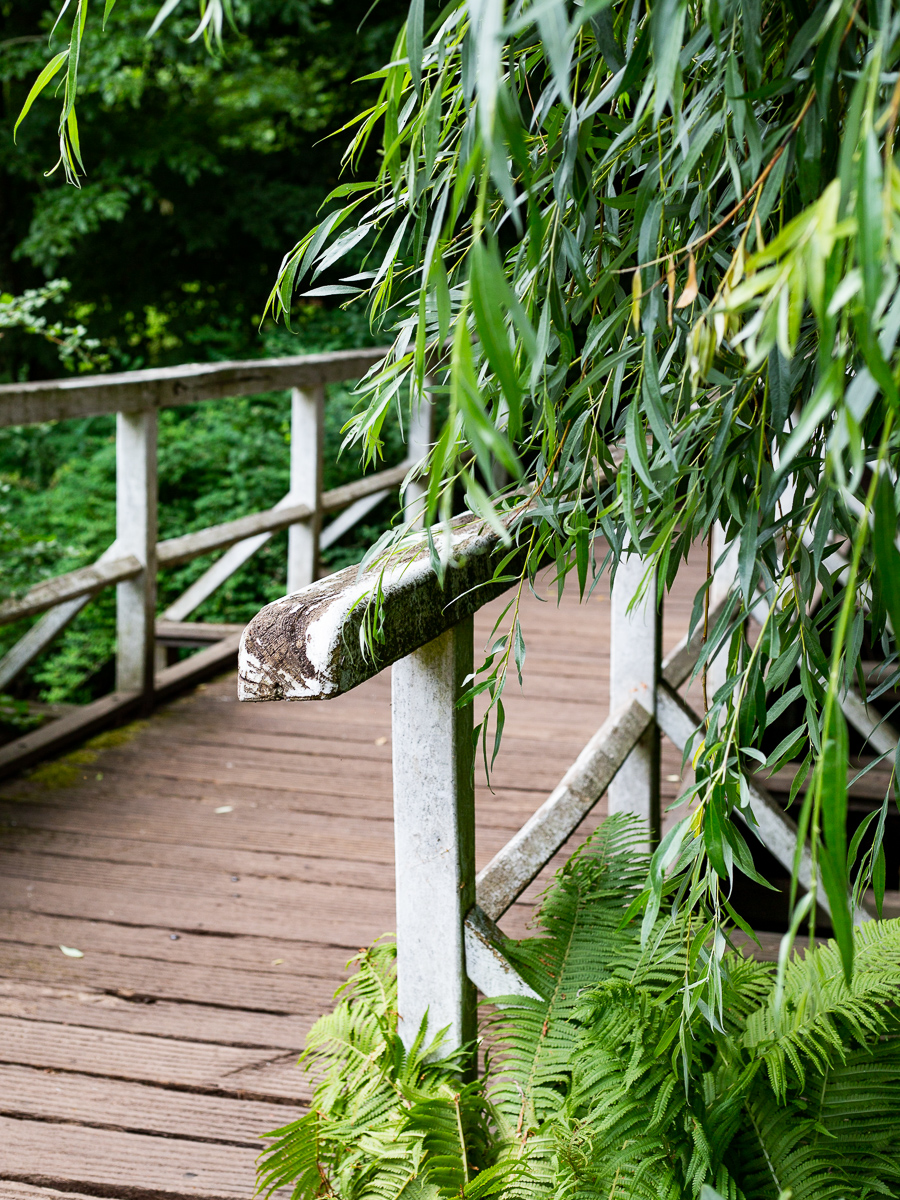 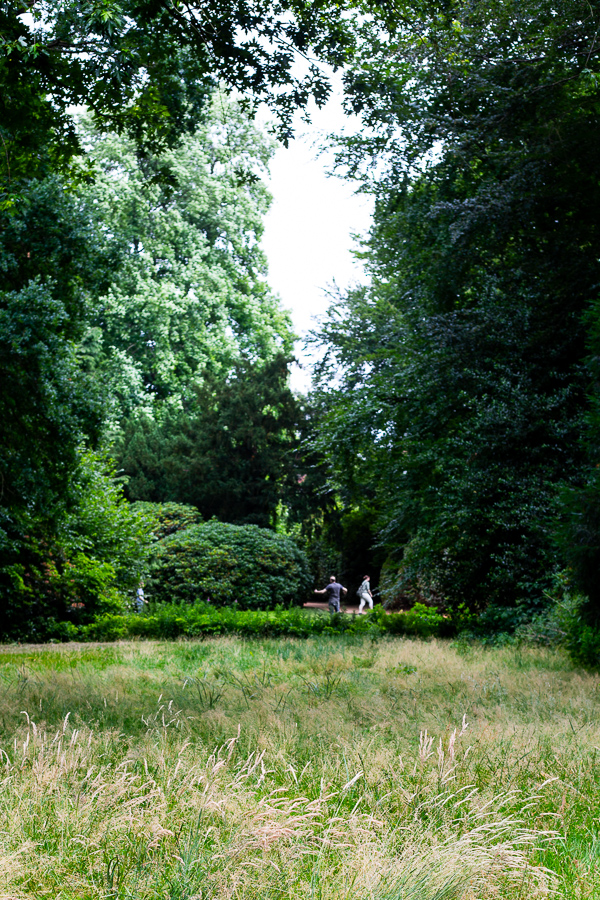 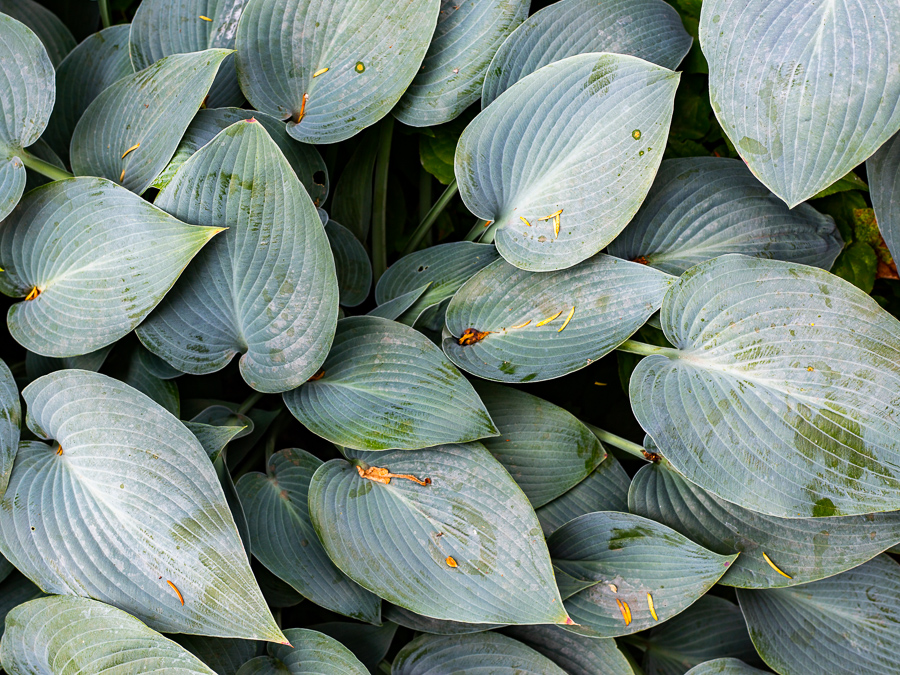 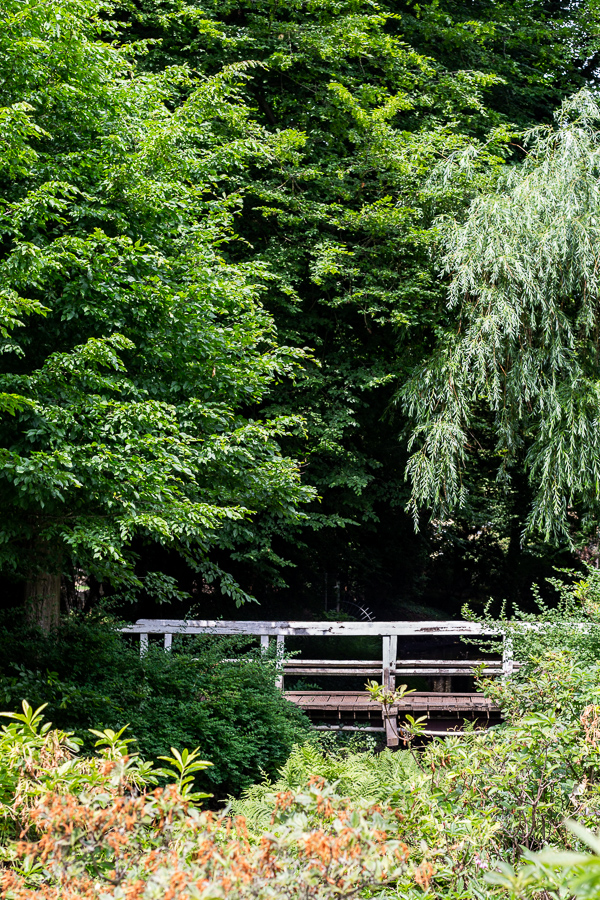 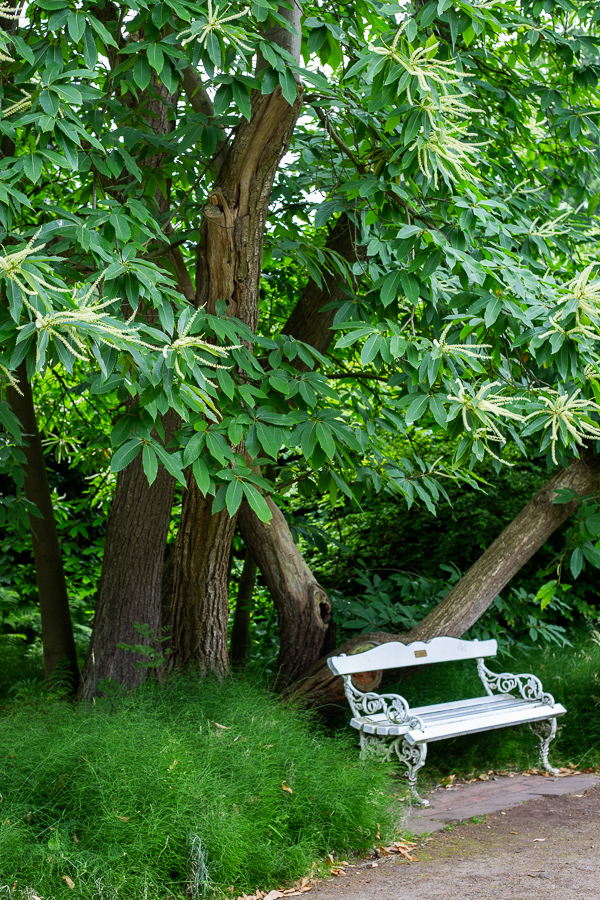 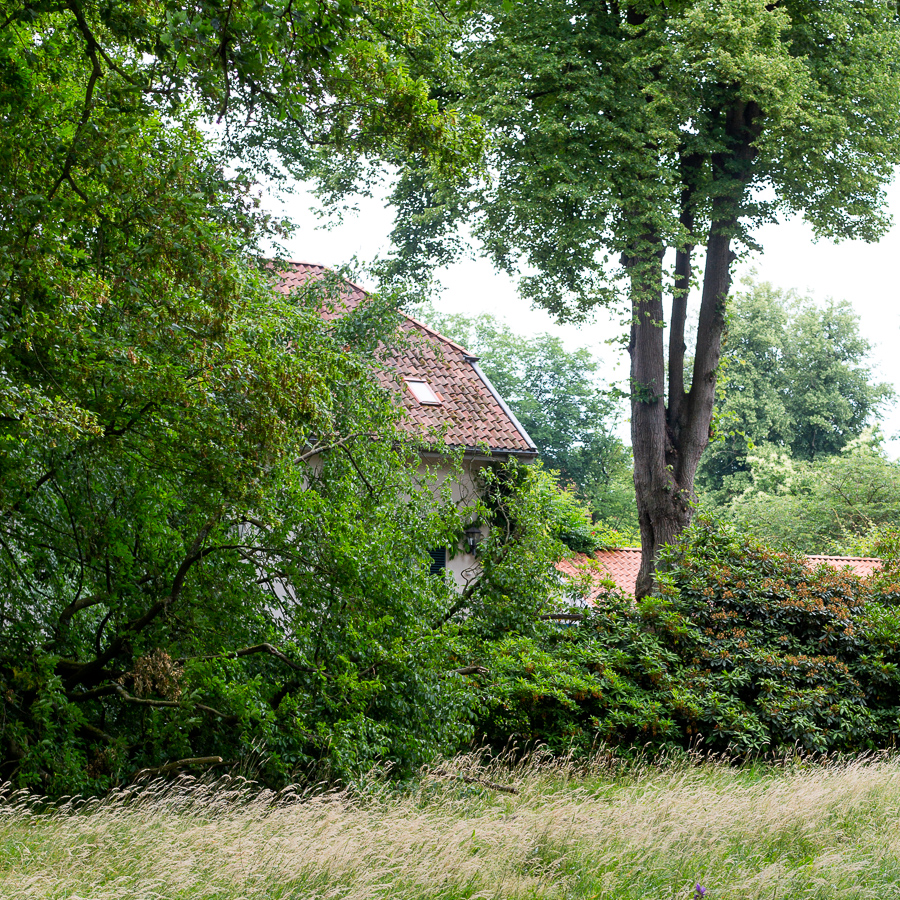