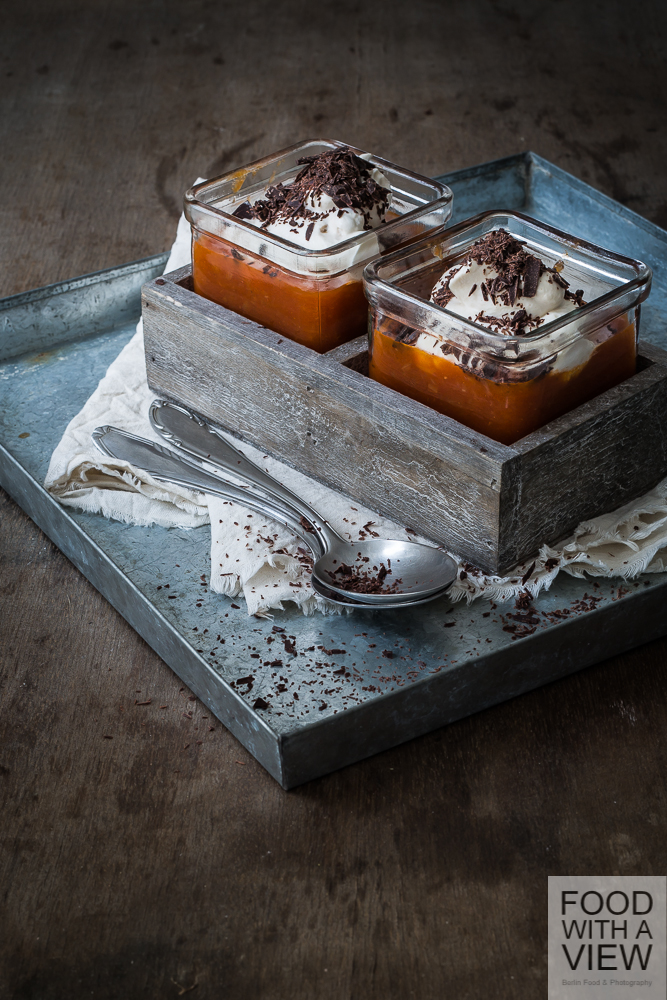 Today, there’s a recipe and a product testing that has inspired it – will be a rather long post, I guess. So, anybody out here loving Grand cru dark chocolate? When we had been approached by the Berlin start-up TRY FOODS, I didn’t hesitate to choose the chocolate set out of several options (which are olive oil, salt, pepper, or coffee). We just love dark chocolate of high quality, and is there anything better to try five assorted varieties?

TRY FOODS – the company’s name says it all. Jörn Gutowski, founder and manager, wants to take food-loving people on a journey, inviting them to explore a whole world behind one single product. All sets contain five high-quality samples showing its broad range of flavors and textures – in case of chocolate it’s five chosen varieties of single-origin Grand cru chocolate by Swiss company Felchlin. It’s a vendor to chocolatiers and chefs only, not a retailer, thus it’s not ready-made chocolate bars you find in the set, but little drops meant to be further processed – and first tested. And that’s what we did.

There’s a booklet in the set (unfortunately in German language only) which helps to get some background about the history of chocolate, the process of chocolate-making, the product’s origin and even about the right way of testing – break off a peace, listen to the sound, gently rub the peace to get its smell and take your time to finally taste it. What’s the basic flavor, how is the finish? Sounds like wine tasting, right, and indeed it felt kind of alike. The booklet’s little interview snips with a chocolatier, a quality manager and some other guys in the world of chocolate support this impression – Jörn has beautifully written the whole peace like his own journey, and we’re ready to take off ourselves now.

Just a word about origins before we finally start: All besides one variety in the set are not certified organic or fair trade. However, both the booklet and the company’s website deal with the topic, indicating that the certification process isn’t that easy for small farmers and cooperatives. They also describe the close and direct relations with producers and partners with no intermediate dealers in between which allows them both to know the conditions and to pay good prices. If you want to know more about it, don’t hesitate to visit the purchasing standards website with information also about the company’s cacao charter.

The set comes in a beautifully designed box (forgot to take a picture, how could this happen?) containing five small paper sachets with a covering on the inside and a zipper to keep the flavors, each containing 40 g of Grand cru chocolate. The variety’s different aromas hit you right upon opening the sachets – it really makes fun to let you nose travel first.

The chocolate drops have the right size for tasting – not that small like drops in high quality drinking & baking chocolate – and show a beautiful cocoa plant imprint. When I buy chocolate bars in shops, I prefer the rather flat ones since the subtle flavors unfold best this way. But this is a product for further professional processing, and here, drops are the usual way which is fine with me.

Finally testing! Regarding the order, we followed the booklet’s recommendation, starting with the softest variety and getting to the most unique one in the end. All sorts are so called Grand cru chocolates which means that they consist each of just one sort of fine cocoa (there’s no English expression for this classification only of the sorts Criollo, Nacional and Trinitario) and have been harvested in a specific region.

First, there’s Maracaibo (65 %) from Venezuela, based on the variety of Criollo. It has been grown on the shores of Lake Maracaibo close to the Andes – a place where Criollo is known to be very good according to the booklet. It’s a very harmonic chocolate – a bit too much for my taste but certainly perfect for beginners in dark chocolate.

We go on with Cru Sauvage (68 %) from Beni in Bolivia. The cocoa trees are wide-spread in the area, that’s what the booklet tells us, and indigenous people living in the region harvest them by hand and carry them by horse and boat to the respective collection sites. The chocolate that comes out in the end is mellow and well-rounded with a dark and earthy backbone. Arne liked it best, my favorite however is yet to come.

Next step: Arriba Nacional (72 %) based on the sort Nacional, which is declared a fine cocoa only lately and in this case is sold by a cooperative from Esmeraldas, Columbia. My heart opened wide when tasting it – notes of pepper and fruits with a silky background, that’s what we wrote down in the booklet. The latter indicates citrus flavors as well which we couldn’t taste, but we agreed that there’s gentle peeks in between other flavors.

Further on with Hacienda Elvesia (74 %) from Trinitario beans, organically grown by Swiss expats living on a Hacienda of the same name in Samaná, Dominican Republic. So wonderfully rich and full of flavors that we couldn’t identify a single note in the beginning and needed some assistance from the booklet. Tobacco is indicated there – and it’s true, now we could taste it, as well as warm spices and a slight touch of roasted flavors.

Finally the cocoa illumination, at least for me: a chocolate simply called Java (64 %), again made from Criollo beans, this time grown in the Eastern Highlands of the island of Java, Indonesia. What a difference compared with the (also very fine) Criollo in the beginning. It’s bursting with flavors, and while Arne needs a closer look, I’m trapped right from the beginning. We catch subtle notes of malt and peat as well a slight edginess on a rich chocolaty tableau. In the booklet we later read, that people tend to either love or hate it for its outstanding uniqueness and notes of Whiskey. A chocolate like an exclamation mark – can’t get it out of my mind ever since.

What a journey! And how much character in each of the chocolates. If you want to do the trip as well, you will have to be quick (and to check out the website for shipping requirements), since TRY FOODS will deliver the sets until 23rd of June only and then stop for summer until September. The good news is: by then, separate chocolate bars of each sample variety will be available for sale, too. Because that’s the whole idea: try them all, and then re-order your favorite. You can do so also with olive oil, salt, pepper, and coffee – would love to once try the first in that row, too, by the way.

* Sponsored: This post is part of an unpaid cooperation. However, the content is created independently and reflects our unbiased opinion.

Well, we haven’t been modest while tasting, and even the whole amount of 40 g of chocolate in each sample are not that much to truly try some melting, baking, praliné-making – and of course, there’s no way to mix them all. But I love the combination of cocoa and savory treats (like here last year, for example), and you don’t need that much chocolate for this like in a cake or in truffles.

Therefor, the warmly-flavored and well-rounded Hacienda Elvesia later on graced a tomato cappuccino with a cream topping mixed with crema di balsamico (on the pictures, you see another chocolate, by the way, since I didn’t take photographs on the first occasion). It’s made with some coulis de tomate losely based on a recipe by Virginie Besançon (whose book I introduced here already) that I cook quite often with a slightly different touch of herbs and spices each time and that I use for almost everything – for pasta, pizza, on crostini or pa amb oli, as a soup basic or for ratatouille…Its fruity and sweet-sour flavors are a match with chocolate, and chocolate goes very well with balsamic vinegar. Can’t believe? Well, trust me… For a gluten-free soup, please pay attention to gluten-free versions regarding crema di balsamico, canned tomatoes, curry and paprika powder.

Fry shallots and garlic in olive oil until slightly colored. Add tomatoes and all herbs, thoroughly squeeze the tomatoes with a wooden spoon and let simmer for at least one hour with lid closed. When I prepare coulis for any other use than soup, I open the lid during the last 30 minutes to get a thicker consistency (which we don’t need in this case). Take off bay leave and star anise and let the coulis cool down until lukewarm.

In the meantime, finely chop the chocolate and put aside. Wip the cream until half firm and add crema di balsamico during the last seconds (don’t fold in too homogeneously, it’s fine if a little pattern remains). Add a little hot water to the coulis de tomate and quickly mix with your hand-held blender until the texture is a little finer (the minimal thinning doesn’t do the very dense flavors any harm, whereas the use of broth instead would falsify the taste). Fill the lukewarm coulis into four glasses, cover with cream and decorate with the chopped chocolate. I mean, with a lot of chocolate. Serve right away – bon apétit! 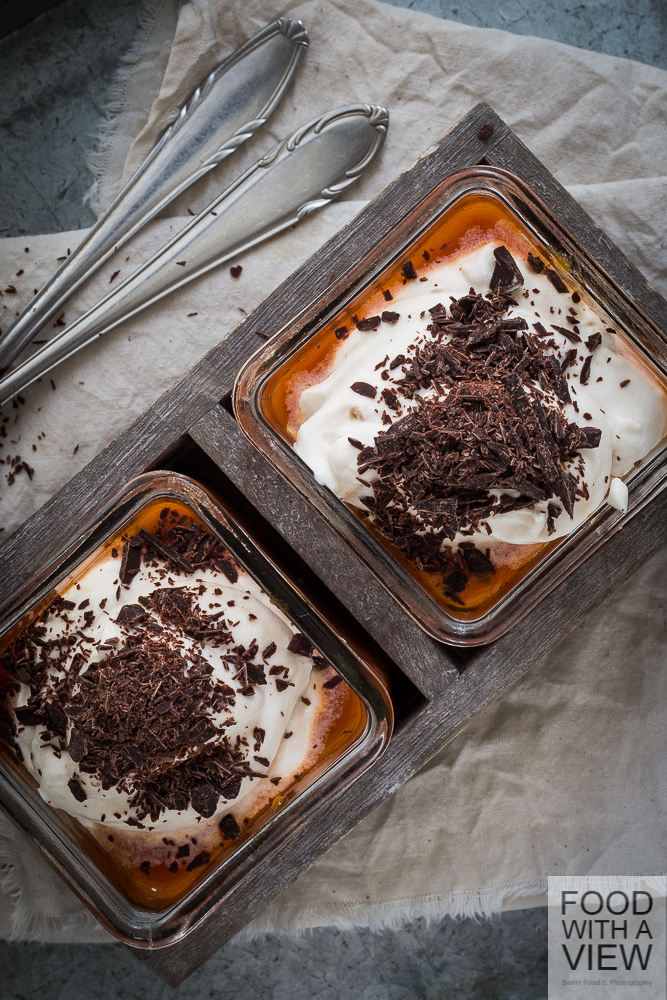 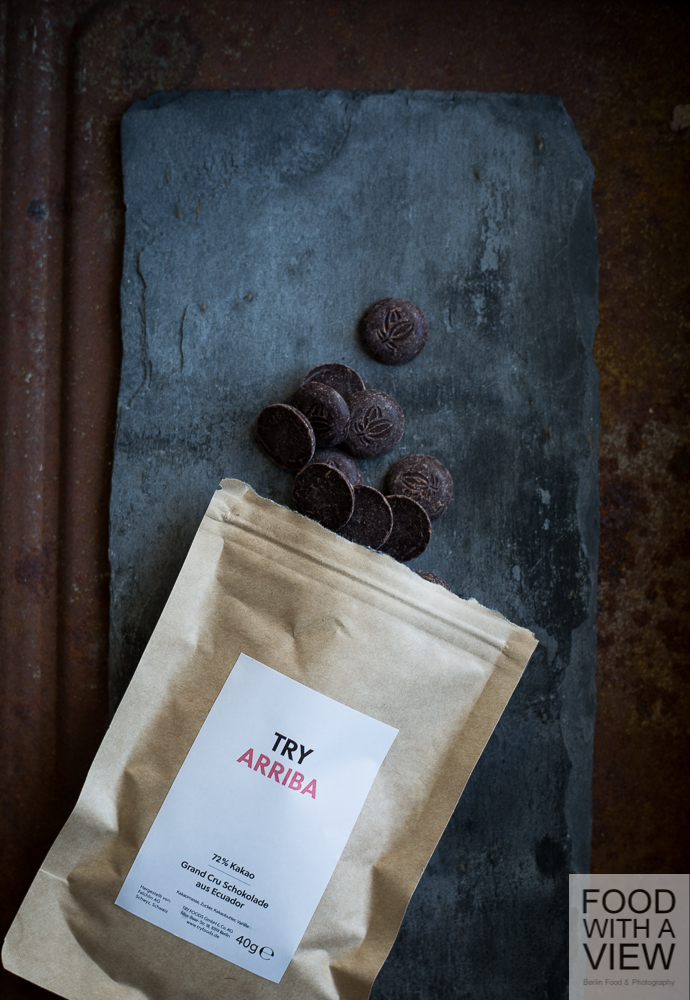 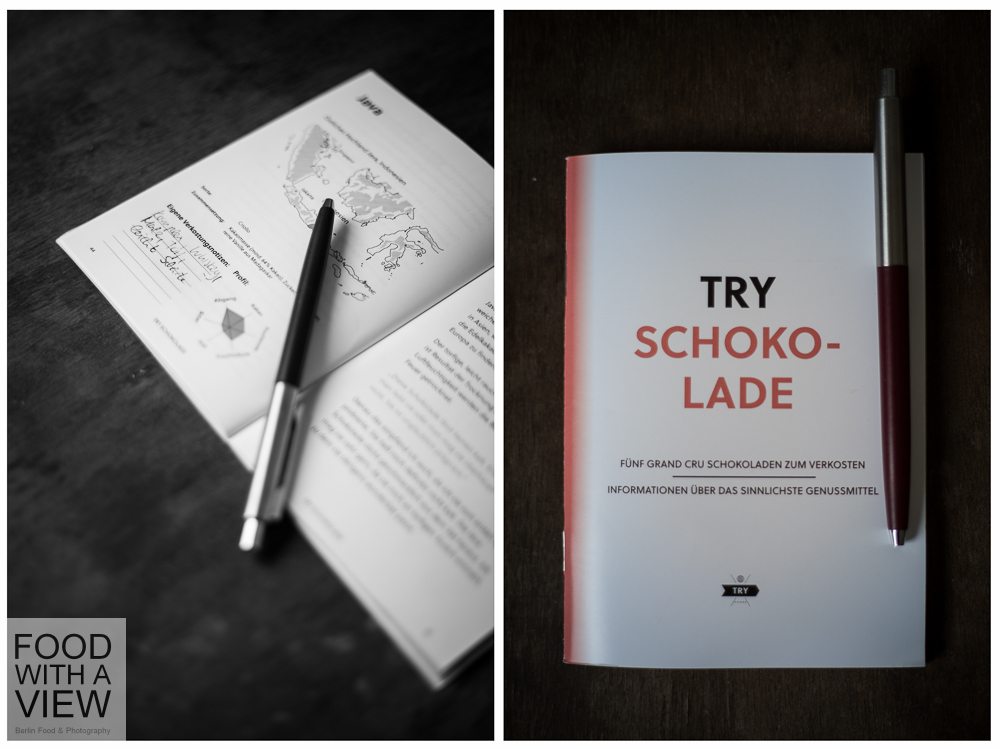 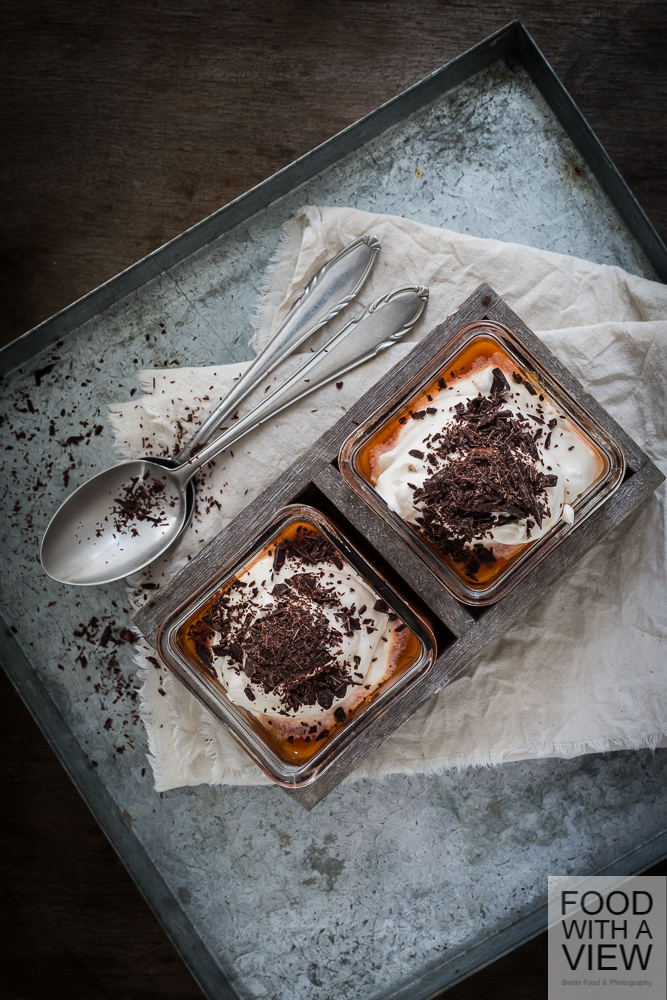 22 thoughts on “Give it a TRY*: Grand Cru Chocolate on Tomato Cappuccino”