Spring has finally – and it seems sustainably – reached the shores of Berlin. That’s why this treat is my dish of the moment: not only because of so many components in it that are packed with chlorophyll but also because of its playful character.

The Italian-Japanese connection is again a result of some cross-inspiration. I planned a more traditional Primavera thing already because I had some fine green asparagus in the house, but then my first Edamame experience (offered to me by my father) and another fine recipe Edamame-Salat mit Tahini-Sauce (Edamame Salad with Tahini Sauce) by Magentratzerl Susanne inspired me to make some additions to the classic greens.

How much I would have loved to also take some cha soba to get an all-over green look and taste but there was none in my kitchen cupboard. I once tried to improvise this delicacy myself by cooking normal buckwheat soba in green tea. If you ever have been offered green tea which has been made with too hot water and has steeped too long you might imagine what my home-infused wannabe-cha-soba tasted like… So I took some normal soba which have led a lonely and forgotten life in the back area of my kitchen cupboard for a while until Uda of Mittag bei Mutti reminded me with some great Soba-Nudeln mit Sesam-Spinat (Soba noodles with sesame spinach).

I later came across another edamame buckwheat noodles connection with some gorgeous Salmon and Edamame Soba Noodles with Miso Vinaigrette on the beautiful blog Inquiring Chef which inspired me to take miso in as well. Some snow peas also joined our dish, and so everything that remained from my Primavera plan was the asparagus… By the way: According to Wikipedia, Pasta Primavera – like Penne alla vodka – seems to root in New York, not in Italy.

Thank you ladies for all the inspiration! Here’s the result: 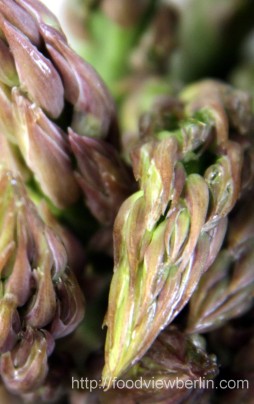 Heat some water in a pot and add Edamame shells. Let cook for about 5 minutes, drain, peel off the beans and put aside. Clean and peel the lower third of some green asparagus and cut each stalk into three parts. Clean some green onions and cut into similar sized pieces. Clean some snow pea shells. Cut two garlic cloves into thin slices. Take a piece of ginger and cut into fine pieces. Roast gently some black sesame seeds in a dry pan and put aside.

In the same pan, heat some sunflower oil. In a pot with boiling salted water, cook the soba noodles for about 4-5 minutes and drain. In the meantime, add garlic and ginger to the hot oil, soon add the asparagus (if you got thick stalks you might need to blanch them first). Roast and stir gently for about 5 minutes, then add the green onions and the snow pea shells. Go on roasting and stirring and add the Edamame short before the other vegetables are done. Add few tamari and miso, a little salt if you like and some pepper. Mix soba noodles with the vegetables and add a view drops of sesame oil. Arrange on plates with black sesame seeds and some herbs (some chive or some basil leaves). I just HAVE to retry this with cha soba soon because I am in matcha mood since a couple of days. I currently add the green powder which I bought a few days ago into every possible treat. I will tell about my experiments soon.

Todays discovery is an art and club space in Berolinastraße in Berlin Mitte. We don’t know much about it, but we like the beautyfully painted windows:

On the Window – Art and club space in Berolinastraße, Berlin Mitte, April 2013