This post is my kind of spring edition – many fruits (and one vegetable) that is in high season now is involved. When I returned from the greengrocer I was so overwhelmed with all the vegetable beauty that I first did not think of pans and pots but of the camera. The four plants worked so good together in a shooting that I wanted to combine them in a dish as well (even though the strawberries and rhubarb were meant for a crumble which will follow in a post next week).

Alsatian Tarte Flambée was on my mind, soon, and as I had some filo dough in the fridge I thought it would do the job as well. However I decided not to take in all four „models“ but to do pairs: rhubarb and strawberries on the one side and green asparagus and loquats on the other side – and both come along with goat’s milk cheese. Arne and me had a lot of fun with taking photos and eating all at the same time and trying to keep the kind of fragile pieces in our hands – this dish is so much a happy spring treat that we needed to touch and feel it. We came to the conclusion that strawberries are overwhelmingly great for pizza – never would have thought of this before. And we just loved the loquats – oven-baked they taste like abricots with a nice touch of acidity.

There have been two major inspirations for this: Christina of the Small Kitchen Chronicles posted a gorgeous Goat Milk Bread Pudding with Mapled Rhubarb the other day and I gladly picked the idea of combining rhubarb and goat’s milk cheese for my tarte (with caramelized rhubarb as I did not have maple syrup at hand). Antje of lifestyle in grün introduced us with loquats some days ago. She served fantastic Karamellisierter Spargel mit Mispel-Vinaigrette (white asparagus with a loquat vinaigrette, recipe in German language) which also seemed to be a wonderful combination to me. Thanks a lot to both of you for the fine inspiration! 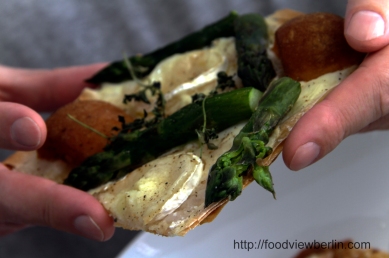 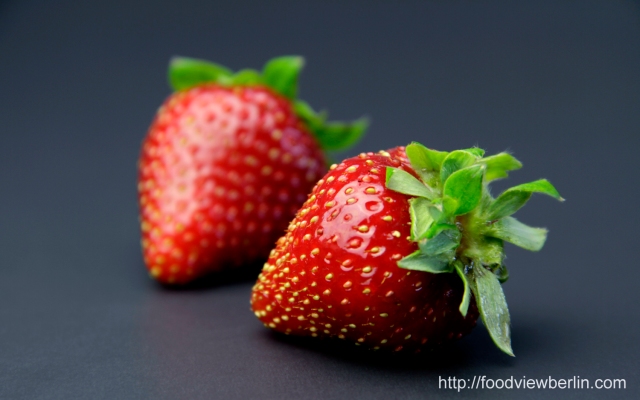 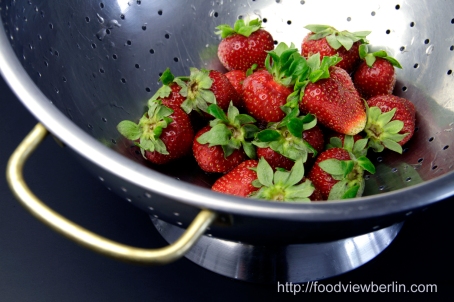 To serve two people with a small portion, take 5 filo dough layers that lie on top of each other. Take it of the fridge a couple of minutes before you start compiling the tarte. Peal the skin off the loquats, cut in halfs and take of the seeds and inner skins. Clean the strawberries and cut into halfs. Trim the rubarb (I don’t peal of the skin if its thin enough) and cut into not too small pieces. Trim and cut into pieces a few green asparagus shoots and cut into pieces as well (I took just the tops and will do some soup with the rest tomorrow).

Blanch the asparagus in boiling water for a minute, drain well and put aside. Heat the rhubarb in a small pan with few neutral oil and add some sugar. Let caramelize for 1 minute. Mix 75 g sour cream and 75 g smetana and salt and pepper to taste.

Cut the layered dough lengthwise in two halfs, put on a baking tray and add the cream mixture on top. Put asparagus, some slices of goat’s milk soft cheese and the loquats on one half and the rhubarb on the other. Pepper to taste. Put to the preheated oven (180 °C) for ten minutes. Add the strawberries and some goat’s milk cream cheese to the rhubarb tart, and add some cleaned lemon thyme twigs on top (I am not sure where the inspiration for this came from but I guess it has been Uda of Mittag bei Mutti who introduced me with this herb that is absolutely fantastic). Bake for another 10-15 minutes until the dough get’s brown (not too dark!) on the sides and the cheese has melted. Take off the oven, add some olive oil on both tartes and some mascobado sugar on the strawberry rhubarb tarte and serve with a salad.

Today, there’s no urban shots as this post is already overcrowded with photos ;-).