It has been at least two months ago already that I first made these truffles, and I did them several times ever since. Indeed, I did not think of posting the recipe now as it doesn’t really fit the current rhubarb and strawberry season. But as – in terms of meteorology – autumn has come back I take a chance on it nevertheless. It’s my perfect appetizer before my morning cycle in the park, because without anything to eat I would most probably faint after the first few minutes and with much more in my stomach I would not move from the spot at all.

The main ingredient of the little beauties is dates, but its true burner is raw cocoa. I have been inspired to try raw cocoa by Antje of Lifestyle in Grün – she is doing fantastic things with raw cocoa butter, cocoa powder and nibs. When Melissa and Kerryanne posted some fantastic Goji Berry Truffles on their very nice blog Happy Offerings, and when I soon after discovered Orientalische Schoko-Pistazien-Kugeln (Oriental Truffles with Cocoa and Pistachio, recipe in German language) at Sylvias beautiful blog Rock the Kitchen, I remembered some attempts in fruit & nut balls that I made many years ago but had already forgotten about. So I gave it a try again and mixed the recipes. Thanks a lot to all of you for the fine inspiration! 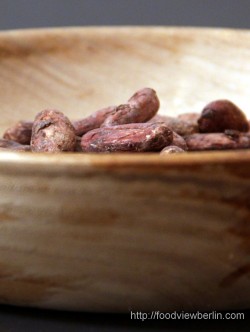 Roast 2-3 tablespoons of pumpkin seeds in a dry pan until they start to smell nicely. Take off the pan and grind with a blender. Add ½ teaspoon of ground cardamom and mix well, put aside.

Take 150 g dried dates without pit and cut them into smaller pieces with a cradle. As the dates are sticky, this works best if you mix the halves of the dates with a little bit of ground nuts before. Add 25 g ground almonds and 25 g ground hazelnuts, 2 tablespoons raw cocoa powder, 1 tablespoon raw cocoa nibs and 1 tablespoon of tahini. You can treat this mixture with a blender but I get better results when I knead it with my hands (it feels good, by the way). When the mass gets to dry, add a little bit of hazelnut oil, if it get’s too sticky, add a little bit more cocoa powder and/or ground nuts.

With the palms of your hands, form little balls and roll firmly through the ground pumpkin seeds. Done!

Today’s urban shots are about industry architecture inside and outside:

Up – Stairway at Former Jewish girl’s school, Berlin Mitte, May 2013 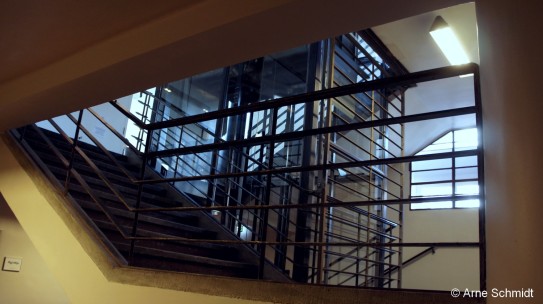