I am a vegetarian for many years now, and I had my episodes with veggie-meat, tofu escalopes and fake ham. Most probably strange desires in the eyes of people who eat meat. However, there have been times when I missed neither the taste nor the texture of meat, but its way of preparation and the flavor of roasted protein – that’s how „steaks“ and „sausages“ came in. From time to time, I still love to re-invent some classic meat dishes with tofu, seitan or textured vegetable protein like Pasta Bolognese (which is easy) or „Boeuf“ Stroganoff (not that easy). But the days of convenient meat look- and name-alikes are gone.

However, there’s one exception that I can’t stand: mock duck. OK, there are two other ones: I fall for vegetarian Mortadella and vegetable ham every now and then as well. But let’s leave those ones aside (I will surely get back to it in autumn, that’s usually my fake sausage and ham time of the year) and turn to the false poultry.

It has been a long time since I last prepared this product from the Asian food store, but some weeks ago, it was time to do it again. I opened the can and was – like always – astonished about the look with its duck skin look-alike. I can imagine that some people love it for that reason and some people don’t. As a foody I don’t need this feature indeed, but when it comes to food shots I have a lot of fun with the vegetarian meat photography. Furthermore, I felt a tiny little bit like a rebel against the gourmet-from-scratch cause (I mean, we are talking about a processed product which I might better hide among my mediocre everyday cooking secrets…).

But what is mock duck like? Of course it doesn’t taste like duck, and indeed in Asia (where mock duck is very popular) people don’t think of it as a substitute but as a dish of its own. It has a nice, savory taste and a fibrous consistency that is quite different from tofu. I first had mock duck many years ago in one of the best Chinese restaurants in Berlin where it was served in a nice sauce but I don’t remember the ingredients. I gave it a homemade-try soon after with some funky take-any-spice-you-can-get-setup and could – of course – not reach the bench-mark. Next attempt was a curry, that was better already. Then I forgot about it for quite some time.

Some weeks ago, I finally took a close look at a Chinese cookbook “Die chinesische Küche leicht gemacht” by Kenneth Lo (the much nicer English title is “The Love of Chinese Cooking”) from the 1970ies that my father had given to me some years ago and which had been his favourite cookbook during my childhood. I still remember the flavors that filled the place on Sundays when he tried new recipes from this book – need I say how much it means to me? It presents many typical recipes by cantons and regions, and I found a very nice meat dish with fermented black soy beans and red bell pepper. I was thrilled, because a package of those beans had been waiting in my kitchen cabinet since two months already for a glamorous performance after I had been inspired by a beautiful wok dish (recipe in German language) at küchenschabe and immediately had bought it.

The combination with mock duck finally seemed to be an option – and it turned out to be gorgeous. But mock duck is nice as well when roasted purely with only some shallots and some pepper – that’s the re-entry to the world of mock duck that I chose before trying the version with fermented black beans (which taste adorably of salt, vanilla and soy sauce). 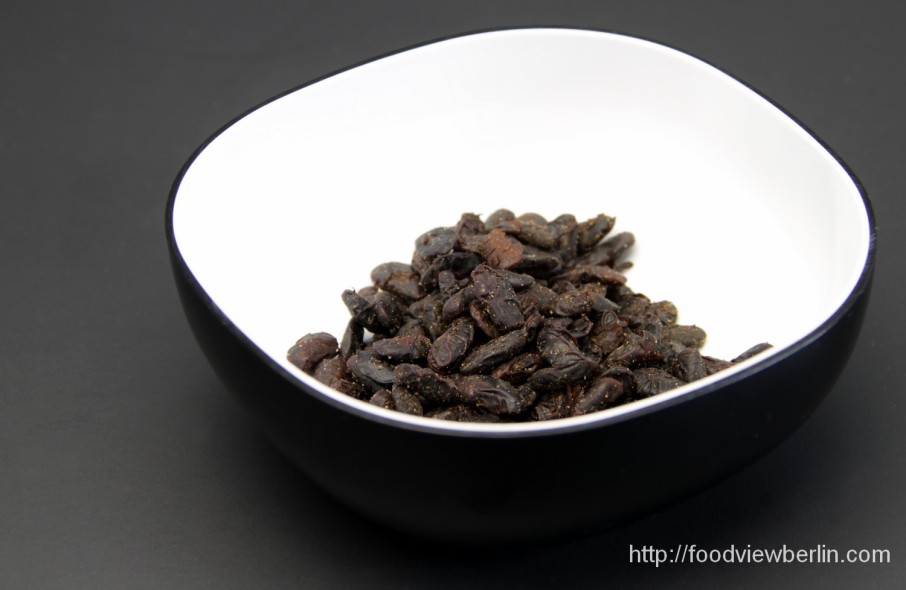 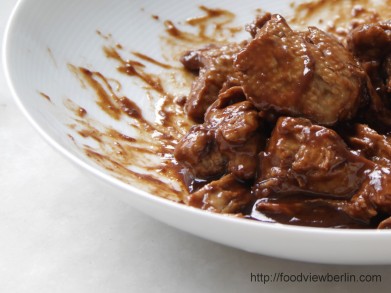 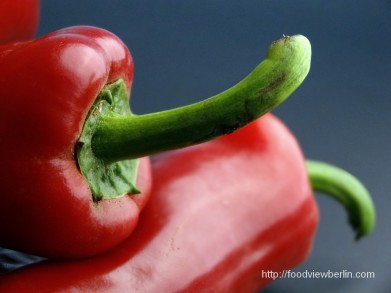 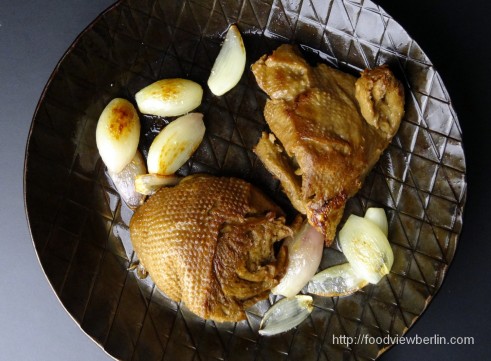 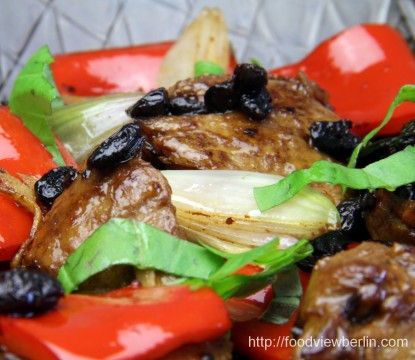 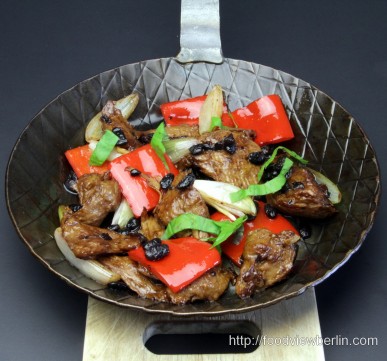 This recipe is inspired by the recipe of “Roasted beef with bell pepper and black bean sauce” in the book mentioned above. To serve two people, open one can of mock duck. Let drain the pieces (there are many small ones in the can sometimes and few big ones another time) and dry with kitchen roll. Prepare the marinade: 1 teasp. tomato paste, 1 teasp. hoisin sauce, 1 teaspoon corn starch, 1 teasp. tamari, ground pepper. Carefully marinade the mock duck pieces with the sauce and put aside for 15 minutes.

Give 1 heaped tablesp. fermented black soy beans into warm water and leave in there for 15 minutes. Drain well. Clean 3 shallots and 2 red pointed peppers. Cut the shallots lengthwise into quarters and cut the peppers into nice squares. Cut a small piece of fresh ginger into fine stripes. Clean a handful of cilantro leaves and chop finely (I took basil because I had no cilantro at hand).

Heat sunflower oil in a pan at medium heat, add the ginger and roast gently for a minute. Add the pepper pieces and shallots and roast for a couple of minutes. Take off the pan and keep warm. Add some more oil, the mock duck pieces and the beans. Roast the pieces gently on all sides and deglaze with 1 tablesp. of dry sherry. Add the peppers, shallots and ginger again, add pepper to taste. Most probably you won’t need salt as the mock duck, the marinade and the beans come along with it already. Serve with cilantro (or basil or any other herb) and serve in the pan with some basmati whole rice. If you are inspired now to try some fals poultry you might also want to take a look at some Peking “duck skin” with pancakes (with the skin made of soy bean curd) at kochpoetin (recipe in German language).

Just another word about the mock duck as a product: Its quality is crucial for the taste and I would recommend to take a look at the ingredients to avoid additives. My experience is – so far – based on non-organic mock duck which is an exception to my habit to buy any protein product from tofu to textured vegetable protein only in organic quality. However I already detected an organic mock duck version and will give it a try soon – I hope it will have the same funky “skin” and great taste. Anybody out there who has exerience in that already?

Today’s two photographs are about reflections in windows. Since Arne showed it to me, I see reflections everywhere… 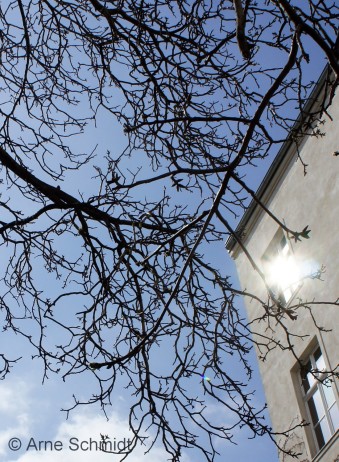